What Has Aaron Been Up To? : Announcing A New iPhone Game! 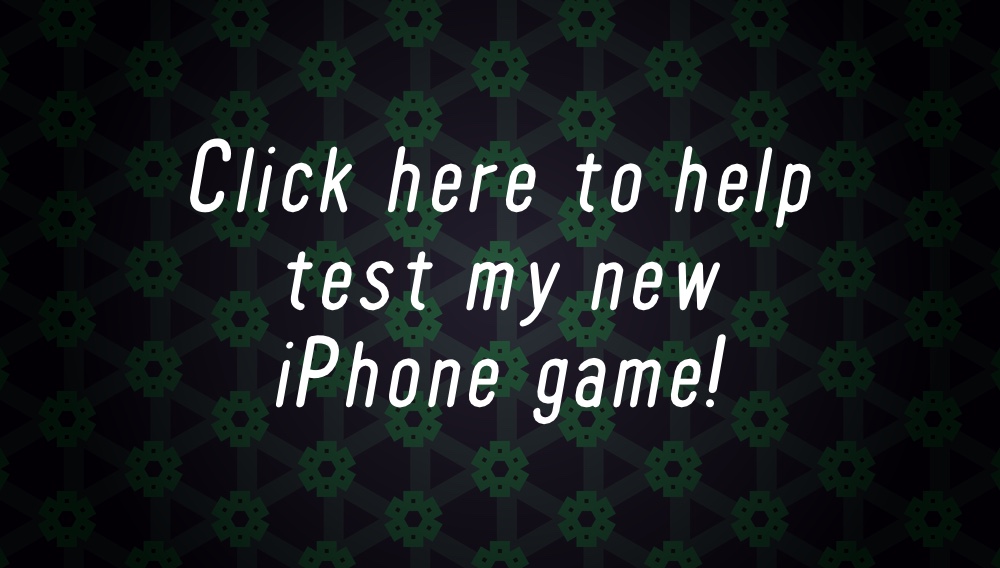 TL;DR: Aaron and his brother Isaac are writing a fun little iPhone game. If you have an iPhone (or iPad), you should help him beta test it!

If you don’t care who Aaron Barrett is, or you just want to know about the game, you should read this instead.

Aaron Barrett likes computers. He was that kid who used to program games into his graphing calculator so that other kids could play them in study hall. He lived in Ohio for a while. Maybe you know him from there. Perhaps from time to time you’ve wondered whatever became of him. More likely you haven’t, but you’re reading this anyway. Either way, I’m going to tell you where Aaron Barrett ended up and how he’s been spending his time. Deal with it.

Like five or six years ago (I don’t know; I’m bad with time), Aaron uprooted himself and set a course for San Francisco. It’s a lively city with breathtaking views, and it often smells like pee. You should totally come visit sometime! Anyway, Aaron really likes it here. There’s always something new to see, lots of smug/nerdy people live here, and it never snows. They also have great bubble tea. 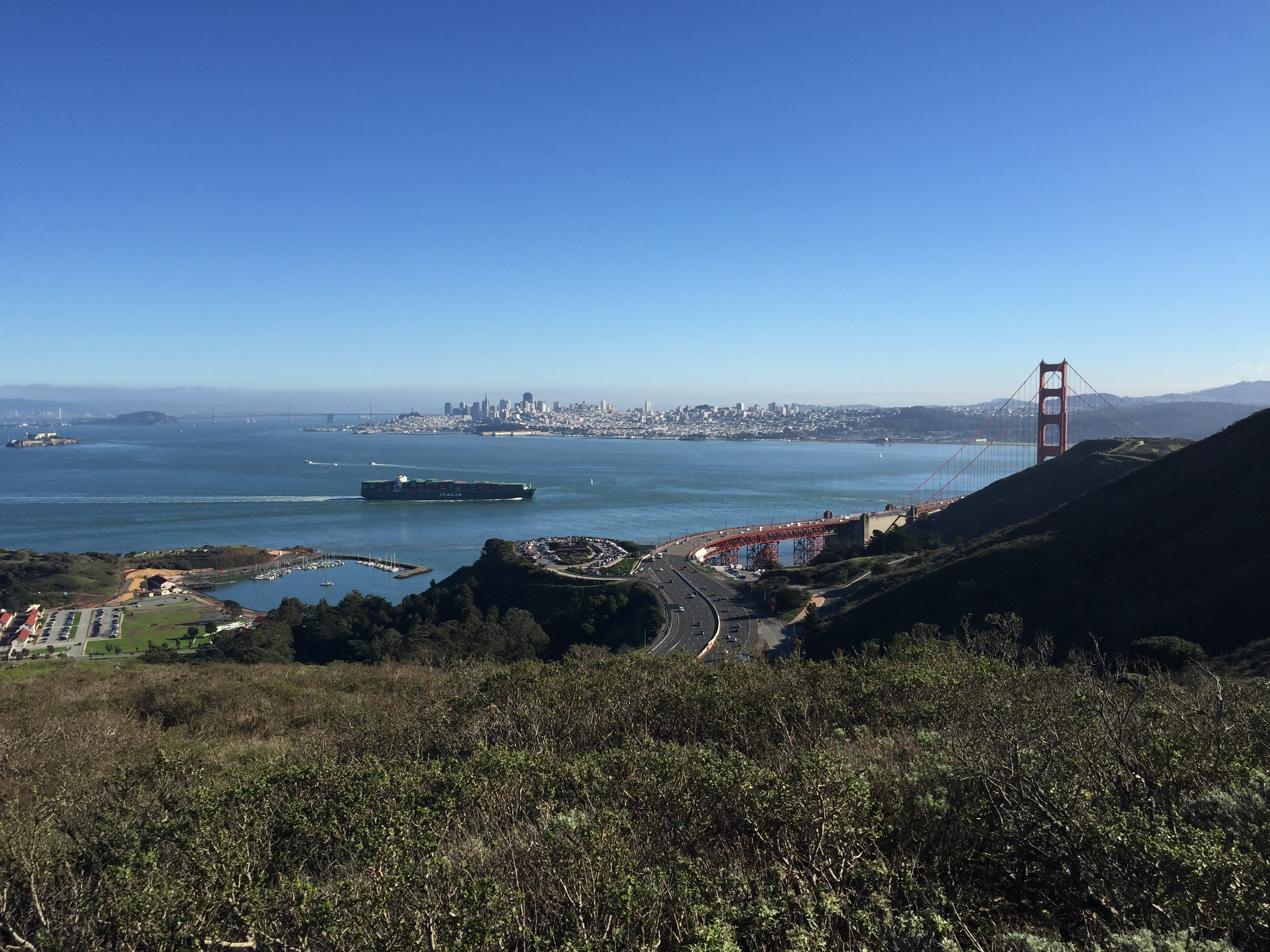 Back then, Aaron was working on his first iPhone game, a puzzler called Stir Fry. It’s a game about vegetables. Aaron teamed up with Bill Devine, who revamped the design and came up with the theme. Mark Laubenthal’s artwork turned out to be the real highlight. So Stir Fry had a lot going for it. But Aaron did this silly thing that game developers should never do. As he was building the game, he neglected to actually test it out on other people. When you don’t test, it’s easy to write a confusing game. By the time Aaron figured out what changes he needed to make, he’d invested so so much work that he couldn’t bear to throw any of it out. So it shouldn’t have been a surprise when the game completely flopped. Aaron was dumb, but at least he learned his lesson. 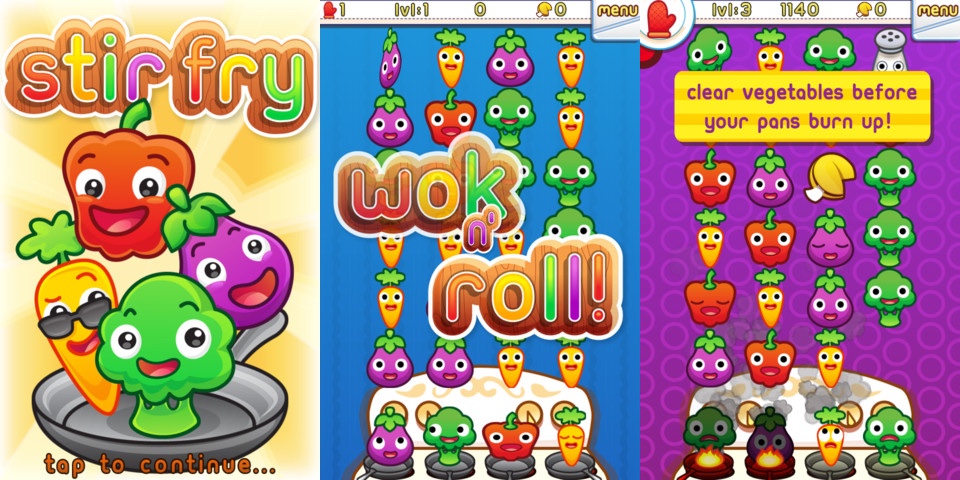 And in the process, he learned a little about programming iPhones. Which was good, because now he very much needed to get a real job. Aaron ended up at MindSnacks, a small learning game startup which eventually morphed into an even better company called Elevate. Fortunately for Aaron, the people at Elevate are outrageously brilliant and dedicated. Aaron quickly discovered that when it came to computers, he’d been doing pretty much everything wrong his whole life. And even though he’s just a programmer, Elevate let him collaborate and experiment in other areas like game design, UX, and even graphics/animation.

That team worked. Hard. Not like you see on TV either. It wasn’t glamorous. Mostly it was a lot of persistent caffeine addicts staring at computer monitors and looking perplexed for a very long time. Don’t get me wrong; it was actually a lot of fun! But there were no swimming pools or DJs involved. Although there was tasty food. Anyway, all those strained eyes and mushy brains were worth it. In 2014, Apple gave Elevate its App of the Year award. To this day, Aaron remains immensely proud of that team’s accomplishments. 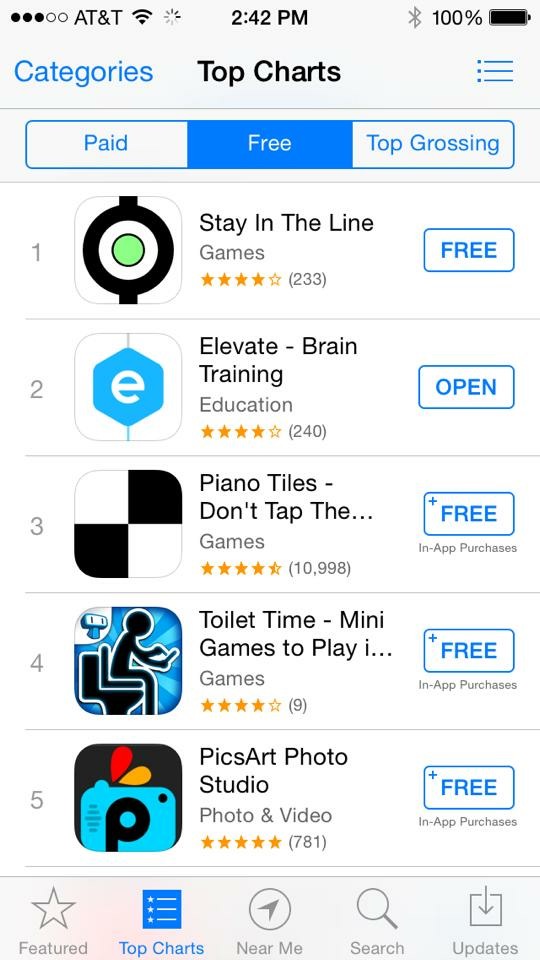 Nevertheless, Aaron reluctantly concluded he had to leave. It was so hard for him to say goodbye. Why would he go? It’s a question he wrestles with constantly. But the answer has something to do with the imaginary games he used to daydream about when he was four years old. Some of Aaron’s earliest crayon drawings were actually levels, wherein he imagined Marioesque protagonists leaping from scribble to scribble. Aaron knew he would miss working with his friends. But he feared that if he didn’t set out on his own again, those daydreams might never become reality. As a career move, leaving may not have been advisable. But Aaron did it anyway.

And right after that, he got sick. It’s a really long story, but basically he thinks he has a fairly rare auto-immune disorder that was making his liver inflamed. And he’d just thrown away his good insurance, and suddenly he was going back and forth to the hospital for all these crazy tests and whatnot. Having never had a remotely serious medical condition in his life, Aaron didn’t know how to cope. He pretty much thought his life was ending. He’s so over dramatic. It took him a few months, but he finally realized that he’s fine. Once he completely cut out alcohol, his liver chilled out a little bit. The doctor says he has nothing to worry about. And now he feels silly. But he has a newfound respect for the struggles of people who have to deal with actual medical problems and the infuriating complexities of our ludicrous healthcare system. The problem still isn’t 100% resolved, but Aaron finally got back to his regular routine.

He stopped showering. And he started writing his own game again. He teamed up with his older brother Isaac, who had moved to the city about a year prior. And they got to work.

They started about seven different prototypes, sank a few weeks to build out each idea, and ultimately realized that none of them were actually fun. So they dumped all seven ideas. Fortunately they’ve been building the games in such a way that a lot of the code can be reused from one prototype to the next. But I won’t bore you with the details.

Click here to see screenshots from all the abandoned prototypes!

Unless you really want to know. Otherwise you can skip this paragraph. They’ve been writing their own game engine, which is actually sort of idiotic since there are already plenty of great game engines out there they could use. Reinventing the wheel is definitely not the most effective use of their time, but writing their own engine gives them a much deeper understanding of everything that’s going on inside the computer. Instead of just telling the computer, “Computer, move the character across the screen,” they have to start at the beginning. “Computer, you have a screen. This is how you turn on a dot on your screen.” The cool part about writing their own engine is that along the way, they’ve happened upon some nifty techniques for turning on screen dots in pretty patterns that otherwise never would’ve occurred to them. Now they get to use those techniques in the game.

Aaron has had a hard time coming up with a name for his new company, especially since all the good domain names are already taken. He considered Odd Gastropod, Data Waffle, and Socially Unacceptable Productions. But he’s finally settled on Planetoid Games. Here’s a website he’s making. He’s trying not to work too hard on it so he doesn’t divert too much time from the game itself. That’s also his excuse for not having a very good logo yet.

It’s taken several months (on top of the years already invested in the engine), and it’s required a ton of inventive problem-solving on the part of Isaac, but at long last the game is beginning to feel fun. It’s still solidly in the prototype phase; all the graphics are just colored rectangles and wireframes. But it’s actually kind of tough to put down. Aaron can’t wait for the world to give it a try.

Aaron wants this game to be so many things. Foremost, he wants it to be a celebration of nature’s chaos. A way of peeling back the mundane casing of the universe to reveal the furious and hypnotic beauty inherent within: symmetry, irrationality, infinity itself. But Aaron also wants it to be a cute time waster for soccer moms while they’re stuck at the dentist’s office. Balancing these seemingly disparate goals may sound ridiculous. Because it is. But that’s just how Aaron rolls.

Incidentally, the title of the game is How I Roll. It’s going to be a game about these cartoony creature things that roll around fancy, geometrically satisfying shapes. Tap to jump. You have to roll and jump to the end of the level. That is all. 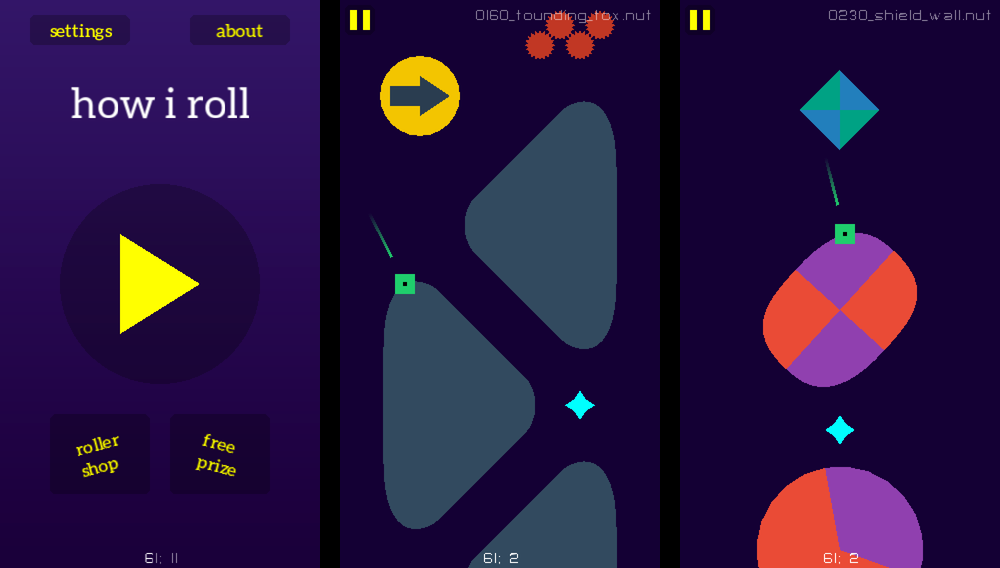 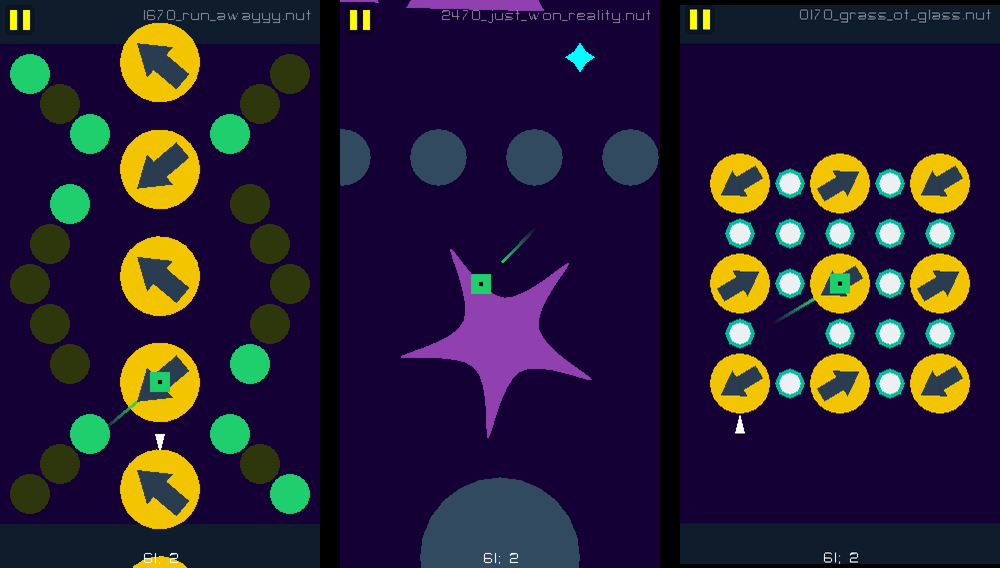 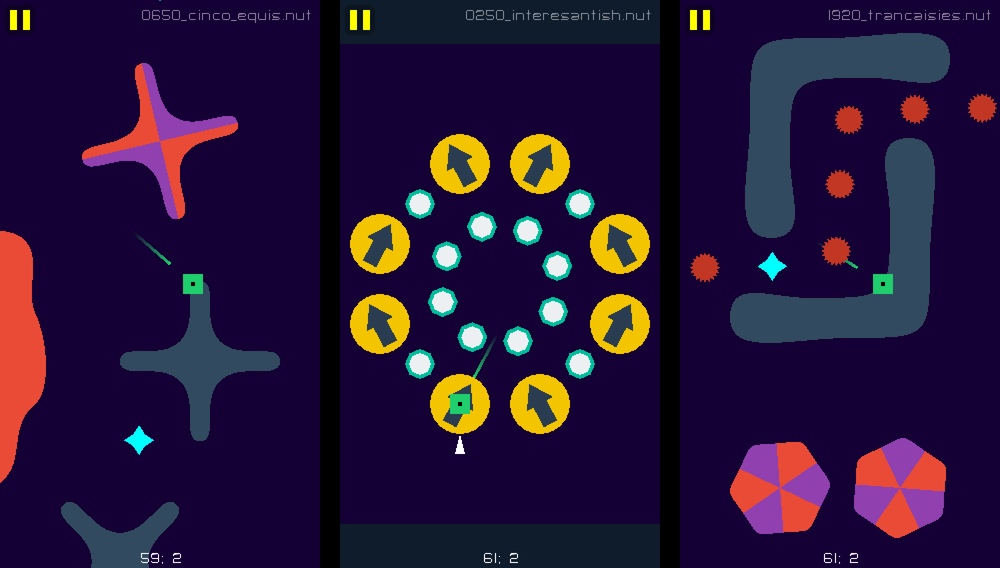 Here’s where you come in. Remember how Aaron messed up before because he didn’t get enough people to test his game? Well, he’s determined never to make that mistake again. Aaron wants to get as many humans as possible to playtest How I Roll right now, while he still has time to listen to feedback and make changes.

It turns out it’s actually super simple to get a copy. All you need is an iPhone (or iPad). Fill out the quick form below, and Aaron will set you up to install the next beta build. If you don’t know what a beta build is, don’t worry–you’re exactly the kind of person Aaron wants testing his game. There’s no limit on the number of beta testers Aaron can have, so it definitely doesn’t hurt to sign up. Even if you only have time to open the app and play the first level, that will still help Aaron and Isaac a ton. You don’t even have to write anything–just play! Stop making excuses and sign up already! And tell all your friends! :)